A pointed finger. We have to be better.

Home > Industry News  > A pointed finger. We have to be better. 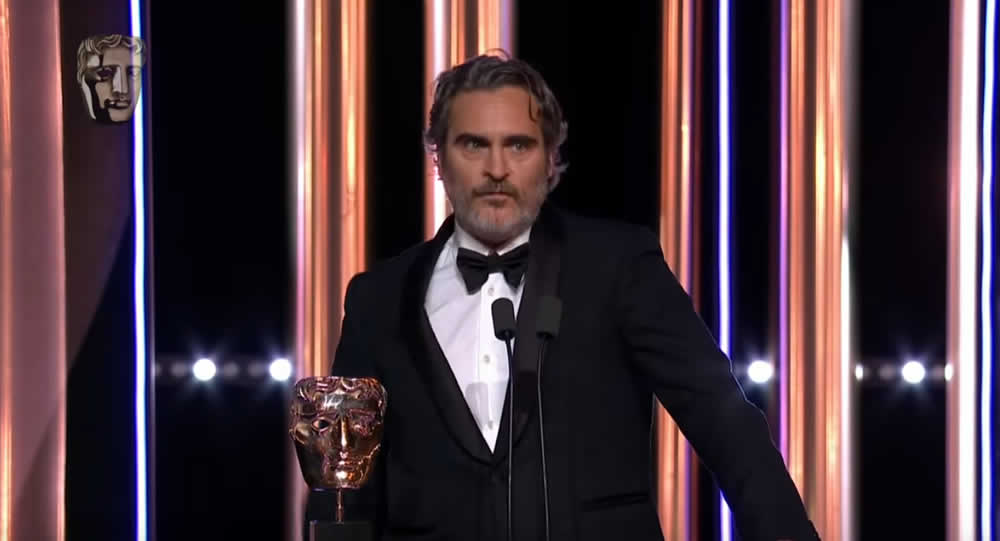 03 Feb A pointed finger. We have to be better.

Tonight, the BAFTA awards (British Academy of Film and Television Arts) were presented to actors, directors, producers,  and films/television shows that represent the best of the best as chosen by the body of members in BAFTA.

In this clip below, Joaquin Phoenix uses his entire acceptance speech to discuss the exclusion of minorities in the industry, and proclaims that he is also part of the problem.

On a side note, he leaves out disabled people as a part of this lack of diversity, but we’re going to look around that omission for the moment, and thank Mr. Phoenix for broaching the subject of diversity, live on stage. He did not have to do that.

As we watched the clip on youtube late this evening, we noticed that closed captions hadn’t been added yet, so below the embedded video here is our contribution to Youtube’s caption submissions. They haven’t accepted or published the closed captions as of yet, but here they are if you want to read what he said.

I feel very honored and privileged to be here tonight.

BAFTAs have always been supportive of my career and I'm deeply appreciative.

But I have to say I also feel conflicted because some many of my fellow actors that are deserving don't have that same privilege. I think that we send a very clear message to people of color that you're not welcome here.

I think that's the message that we're sending to people that have contributed so much to our medium and our industry and in ways that we benefit from.

I don't think anybody wants a handout or preferential treatment, although that's what we give ourselves every year.

I think that people just want to be acknowledged and appreciated and respected for their work. This is not a self righteous condemnation because, I'm ashamed to say I'm part of the problem.

I have not done everything in my power to ensure that the sets I work on are inclusive, but I think that's more than just having sets that are multi-cultural.

I think that we have to really do the hard work to truly understand systemic racism.

I think that it is the obligation of the people that have created and perpetuate and benefit from a system of oppression to be the ones that dismantle it.

Is he right? Dang straight he is. Will we see more change?

Our mission is to fight for inclusive crews and casts, but there’s plenty of walls in front of us that still need a battering ram to get to the other side, it seems.

You can find out more about which cookies we are using or switch them off in settings.

This website uses session cookies so that we can provide you with the best user experience possible when making donations and to track which pages you visit (Google Analytics).

Third party cookies from the embedding of YouTube and Vimeo videos exist and are attached to our site as a result.

Strictly Necessary Cookie should be enabled at all times so that we can save your preferences for cookie settings.

If you disable this cookie, we will not be able to save your preferences. This means that every time you visit this website you will need to enable or disable cookies again.